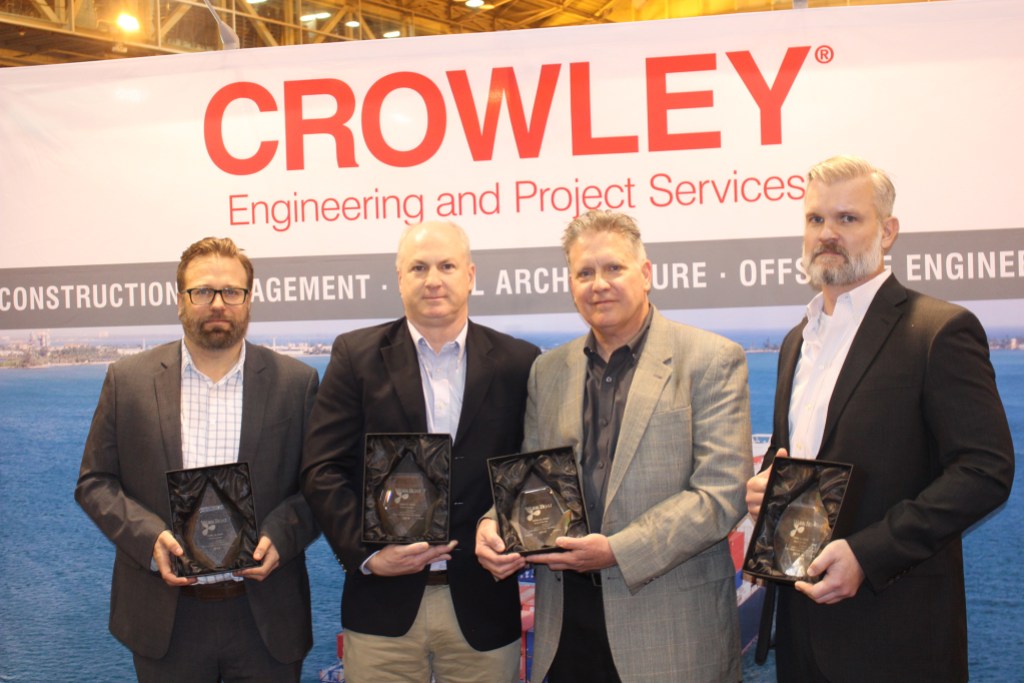 Crowley Maritime Corp. and subsidiary Jensen Maritime, the company’s Seattle-based naval architecture and marine engineering firm, were honored with the 2019 Significant Boat of the Year Award during the International Workboat Show in New Orleans last week. This award recognizes the company’s industry-leading combination container/roll on-roll off (ConRo) ships, MV El Coquí and MV Taíno, the first of their kind powered by liquefied natural gas (LNG). Workboat’s recognition of the ConRos as tops among its annual Significant Boats honorees marks the first time that the award has been presented to a large, oceangoing container vessel.

“The award for Crowley’s LNG-powered ConRos comes on the heels of the successful closeout of our $550 million investment to transform the way we service our cargo shipping and logistics customers,” said Rob Grune, senior vice president and general manager, Crowley Shipping. “These innovative vessels, the first of their kind to be powered by LNG, have greatly expanded the company’s U.S.-flag cargo fleet and allow us to provide our customers with safe, reliable, fast cargo transportation services. They are a source of pride for us and for the men and women who designed, built and crew them.”

Wärtsilä’s ship design team worked together with contributions from the Crowley/Jensen teams to successfully produce the Commitment Class vessels from the keel up to meet the specific needs of Crowley’s customers shipping cargo between the U.S. mainland and Puerto Rico, the ships’ dedicated trade under the Jones Act. Both ships were built in the U.S. at VT Halter Marine shipyard in Pascagoula, Miss., with onsite construction management by Crowley, and were delivered in July and December 2018.

“These vessels like the others nominated for the award are a testament to the strength and importance of the Jones Act,” said Cole Cosgrove, vice president, Crowley global ship management. “It’s important to recognize the risk that the owners of each of the nominated vessels took, and the ingenuity and skill provided by each of the engineering firms and shipyards that it took to bring these new ideas and concepts to life. American owned, built and operated still looks very promising.”

Crowley’s ConRo ships provide optimal performance and safety while setting new standards for environmentally responsible shipping. The ships carry up to 2,400 20-foot equivalent container units (TEUs) at a cruising speed of 22 knots – providing enhanced transit times of just over two days. An enclosed roll-on/roll-off garage has capacity for 400 vehicles and other rolling stock.

Fueling the ships with LNG reduces emissions significantly, including a 100% reduction in sulphur oxide (SOx) and particulate matter (PM); a 92% decrease in nitrogen oxide (NOx); and 35% reduction in carbon dioxide (CO2) emissions per container, compared with current fossil fuels.

“The Crowley and Jensen teams have received national recognition for innovative designs by WorkBoat over the years but being named as the top significant boat of the year is a true honor,” said Johan Sperling, vice president, Crowley and Jensen. “Crowley’s team is proud to not only develop significant boats, but to also lead the industry with a variety of efforts – project management, ship management, construction management, and naval architecture & marine engineering services – all of which it takes to deliver on such a complex project.”